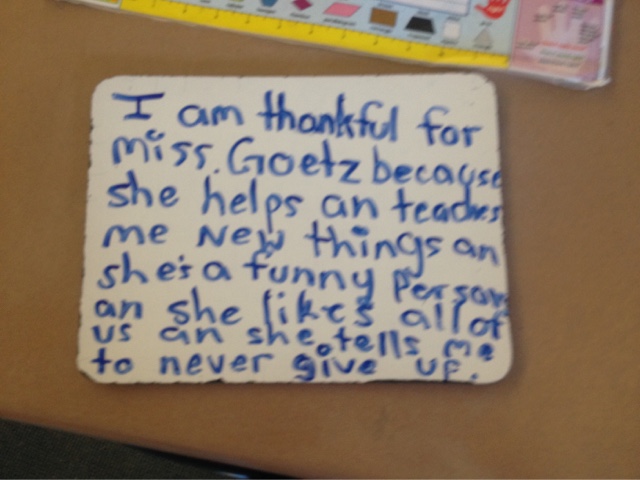 So I’ve done it, I finished my first year as a teacher and I’m on the precipice of my second. I spent the day writing notes of my memories next to the names of my students. If you don’t know anything about my school, I’ll tell you it’s nestled in a pocket of the world that can be a harsh reality for 7 and 8 year olds. They are dealing with abuse, unstructured lives, jail, and broken families. My days of school were often swollowed up by hardships as I took on not only the task of teaching but loving.

Amidst the tough were embarrassing moments that sprinkled my day with laughter such as feeling a tug on my neck as I leaned over the laminator only to scramble to pull my id badge out from pulling me into the machine just an hour before kids arrived the second day. Then, there was my distress when one of my most challenged students found an inappropriate book that made its way into my library. I had pencils hit me, meltdowns complete with tears and words of anger, cheating, bed bugs, scabies, lice and even a few moments of cleptomania. However, alongside these were the moments when light shone through the cracked vessels of these students lives.
A little boy eager to share his fish constellation drawing with you in the midst of a hectic day.
A classroom leader breaking into tears as you pull her aside to find out why she has been displaying such attitude only to learn its coming from her fear about summer school.
There is the girl with long braided pig tails and a jean skirt that reaches her toes pondering out loud, “But I’m a bad kid,” when you tell her probably for the first time there are no bad students. And then laughing as the same student plugs her ears during a Halloween song at music class knowing you were just like her wanting to follow all your religious rules. And although she never could quite focus in class she kept an unbroken gaze as she sketched the playground with chalk and kindly directed another student to join in her efforts.
Then, there is the little boy who hit you with a pencil one day but later on shares about his mothers superb pizza as you guide him up the steps to lunch with the teacher.
There was the boy beloved by all his peers who had such brave integrity shyly admitting he was the one talking when his friend was given the blame.
And the new girl who twirled around at recess, who, in winter time, was eager to share that her new car had heat! But her writer’s voice was one unparalled to any you had heard from even those well beyond her years.
Another student after being helped correct one math problem took her own initiative to fix a bunch more and another makes up math problems at home eagerly sharing them with you at school.
Yet another girl wisely answered the teacher posed question as to why no one in the class asked questions about problems with content with “maybe we are afraid to be embarrassed.”
And finally one who after being disciplined announced, “I know, I know Miss Goetz, you still like us,you always say that”
I can see the beautiful of this year, once hidden in the bramble of the broken and because of it I anticipate a new year of sifting through the seemingly impossible to the moments that infuse this life with beauty. Year two, I embrace you with arms open wide, filled with the love and strength of a Father who gives me the ability to accept the challenges and celebrations of each moment of the school,of bringing his kingdom here on earth.

2 thoughts on “Memoirs of a First Year Teacher”